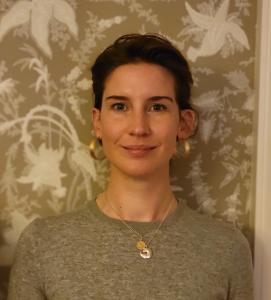 Maureen Kelly works on the connected questions of power, truth, and subjectivity in the study of Religion, with a focus on the critical value of comparing Christian theological and modern European thought. In current work, she is interested in genres of writing and the Foucauldian notion of truth-games, attending to the relationship between public rituals of truth-telling, their political and ethical effects, and the histories of their rhetorical forms. Her dissertation Confessions, Confessions: Reading Augustine and Rousseau after Foucault (2021) reads key passages of the Confessions by Augustine of Hippo next to passages from the eighteenth-century Confessions by Jean-Jacques Rousseau to highlight the stakes of the confession in the composition and operation of each text. She has also written pieces on power and confession (Confession, counter-conduct, critique, 2020) and the ethical modes of genres of self-writing (Beyond Christianity and Commentary, 2020). In teaching, she is interested in bringing critical questions to a history of philosophical, theological, and literary texts to open new avenues to examine current issues. Her courses this year address the sexual ethics of early Christianity delineated from the Greco-Roman ethics in the final volume of Foucault’s History of Sexuality (Foucault and the Christians), and the modes of writing that develop in the early modern and Enlightenment founding texts of self-government (Religion, Writing, Revolution).