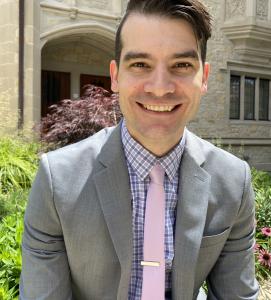 Through an analysis of theological responses to leprosy in Christianity, Mark Lambert's scholarship explores the interdisciplinary entanglement of the history of medicine, historical theology, and medical ethics. Spanning from medieval Europe to the twentieth-century United States, his research on leprosy exhibits a global, transhistorical focus with critical relevance for our current global context.

In his dissertation, "The Sacramental Sickness: The Symptomatic Correlation between Leprosy and the Eucharist in Historical Theology," he argues that the historical theologizing of leprosy alongside sacraments such as the Eucharist provides key ethical insights for how religious communities today approach stigmatic illness. Working primarily with premodern Franciscan treatises and biblical commentaries of Protestant reformers, he demonstrates that medical knowledge was historically a vital part of the epistemological repertoires of theologians. Moreover, this engagement with medical theory could critically augment theological inquiry with consequences for the ethical constitution of communities and even the contours of public health policies. His current research focuses more fully on the religious milieu of the leprosy settlements on Molokai, Hawaii, particularly by connecting premodern approaches to the practical theologies of Father Damien de Veuster and Mother Marianne Cope.