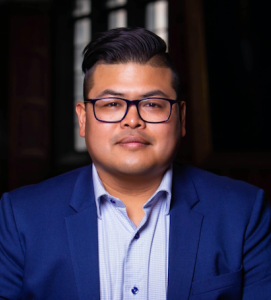 John Sianghio (MDiv '15; PhD '22) is a religious ethicist whose research and teaching interests lie at the intersection of religion, culture, and politics. A former political scientist and military analyst, John is particularly concerned with how religious perspectives inform the ethical exercise of power, especially the enforcement of human rights norms.

His dissertation, Can Might Make Rights? Dialogical Ethics and Cultural Value Formation in Armed Humanitarian Intervention investigates the ethics of armed humanitarian intervention into situations where rights violations are rooted in widely held cultural biases and popular will. John argues that moral frameworks for intervention into such situations coming from legal and political perspectives often fail because they paradoxically assume that cultural values are and should be self-determined yet rely on the presupposition of a universally valid human rights regime to override those cultural determinations when atrocities are committed. In contrast, John draws on the religiously informed perspectives of ethicist James Gustafson and social anthropologist Talal Asad who both understand moral formation to be a dialogical process between a subject and the divine defined, not as the deity of a particular scriptural tradition, but as the Otherness of the surrounding world. John argues that a framework for armed intervention rooted in such a dialogical perspective provides a means of simultaneously respecting indigenous values while still providing parties in conflict a means to make coercively enforceable rights claims on one another.

John’s teaching includes courses in religion and human rights, the ethics of war, and the contribution of religious traditions to conceptions of community and political life.