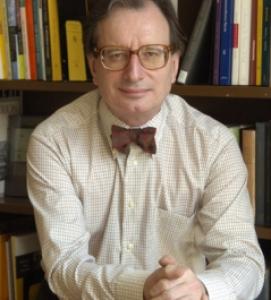 Professeur émérite at the Université Paris-IV (Sorbonne), Department of Philosophy.

Jean-Luc Marion works at the intersection of contemporary phenomenology, the history of philosophy, and Christian theology. Many of his books are into 2nd, 3rd, and even 10th editions, and have been translated into several languages. In Reduction and Givenness, Being Given, In Excess, Givenness and Hermeneutics, and most recently Reprise du donné among other works, he has presented and developed a phenomenology of givenness. Elsewhere he has applied those results to a variety of special subjects such as painting (Courbet ou la peinture à l’oeil), love (Prolegomena to Charity and The Erotic Phenomenon), and certitude (Negative Certainty). In more directly historical work Marion has published several studies reading philosophy through a phenomenological lens, particularly Descartes. Full-length works include Sur l'ontologie grise de Descartes, Sur la théologie blanche de Descartes, Descartes' Metaphysical Prism, and most recently Sur la pensée passive de Descartes. In theology and the history of Christian thought Marion wrote The Idol and Distance and God Without Being on the question of God and metaphysics, and more recently he has written books on Augustine (In the Self’s Place) and on the concept of revelation (Givenness and Revelation). He has also worked in Greek and Latin patristics and in medieval thought. His most recent title is Brève apologie pour un moment catholique. In 2017 a collection of short pieces and a collection of interviews with Dan Arbib will be published in translation (Believing in Order to See and The Rigor of Things).

Marion is a member of the Académie Française (elected 2008, received as an immortel in 2010), the Accademia dei Lincei in Rome (2009), the Pontifical Council on Culture (2011), and the Academia Chilena de Ciencias Sociales, Politicas y Morales (2015). He is the recipient of many awards, including the 1992 Grand Prix du Philosophie de l’Académie Française, the 2008 Karl-Jaspers Prize of the city and University of Heidelberg, and the 2012 Humboldt-Stiftung Prize. Marion has also received nine honorary doctorates, most recently from the Australian Catholic University, Melbourne (2015). The same year he was elected Chevalier du Tastevin, Clos-Vougeot in Burgundy. Previously he was professeur at the Institut Catholique de Paris and directeur of the Centre d’Etudes Cartésiennes, and in 2014 he was selected to give the Gifford Lectures at the University of Scotland, Glasgow (now published as Givenness and Revelation). In 2018 Marion will be a visiting professor at the Universität Regensburg.