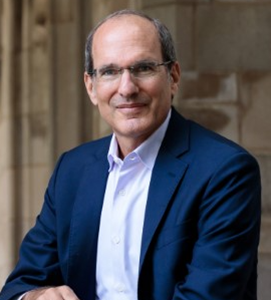 Staff Dean of the Divinity School

Much of David Nirenberg’s work has focused on the ways in which Jewish, Christian, and Islamic cultures constitute themselves by relating to or thinking about each other. His first book, Communities of Violence: Persecution of Minorities in the Middle Ages, studied social interaction between the three groups in order to understand the role of violence in shaping the possibilities for coexistence. Anti-Judaism: The Western Tradition, studies the work done by pagan, Christian, Muslim, and secular thinking about Jews and Judaism across the long history of ideas. Neighboring Faiths: Christianity, Islam, and Judaism Medieval and Modern, sought to bring these methodologies together in order to show how, in multireligious societies, interactions between lived experiences and conceptual categories shape how adherents of all three religions perceive themselves and each other. Aesthetic Theology and its Enemies: Judaism in Christian Painting, Poetry, and Politics focused on how thinking about Judaism shaped the ways in which Christian cultures could imagine the possibilities and limits of community and communication. His most recent book, Uncountable: A Philosophical History of Number and Humanity from Antiquity to the Present, was written in collaboration with a mathematician (his father Ricardo Nirenberg), and will appear from the University of Chicago Press this year. He is currently at work on a book he is calling Adam’s Seed: A World History of Race and Religion in Judaism, Christianity, and Islam. David is currently the Dean of the Divinity School at the University of Chicago, where he has also served as Executive Vice Provost and Dean of the Social Sciences Division.