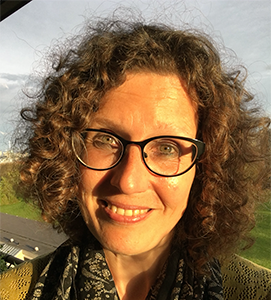 Claudia Welz is Professor of Ethics and Philosophy of Religion at Aarhus University. For the Spring Quarter of 2025 she will join us as the Joyce Z. Greenberg Visiting Professor at the Greenberg Center for Jewish Studies. Her research and teaching has focused on Continental philosophy and theology, particularly existential philosophy, hermeneutics, French phenomenology, the philosophy of dialogue, modern and postmodern Jewish thought, the intellectual history of Christian theology, and the contrast between Biblical and post-Holocaust accounts of ‘the human’ and ‘the divine.’ She is especially interested in questions of identity formation and interfaith discussions of anthropology, epistemology, and ethics. Her work is located at the crossroads of different disciplines including trauma and memory studies, and it draws extensively on literature, music, and visual art.

Welz is the author of the monographs Love’s Transcendence and the Problem of Theodicy (Mohr Siebeck, 2008), Vertrauen und Versuchung (Mohr Siebeck, 2010), Humanity in God’s Image: An Interdisciplinary Exploration (Oxford University Press, 2016), and the essay collection SinnSang: Theologie und Poesie (Nordpark-Verlag, 2019) about the work of the poet Elazar Benyoëtz. She has edited the volume Ethics of In-Visibility: Imago Dei, Memory, and Human Dignity in Jewish and Christian Thought (2015) and co-edited the anthologies Despite Oneself: Subjectivity and Its Secret

Welz has founded the interdisciplinary Center for the Study of Jewish Thought in Modern Culture at the University of Copenhagen. Recently, as senior research fellow at the Institute for Advanced Studies in the Humanities, Bad Homburg & Goethe-University Frankfurt, she has contributed to the project Religious Positioning: Modalities and Constellations in Jewish, Christian, and Islamic Contexts.

Her ongoing projects revolve around ethical and epistemological aspects of ‘dialogue’ and an exploration of the potential of the second-person perspective. Moreover, she is working on a trilogy entitled “Vox peregrina: A Phenomenology of Listening to What Cannot be Heard,” which examines experiences of the ‘foreignness’ of inaudible ‘voices’ such as (1) the ‘call’ of conscience, (2) the ‘word’ and silence of God transcendent, and (3) ‘alien voices’ in the mind of severely traumatized and/or mentally ill patients. The aim is to develop a hermeneutics of the senses by taking their interrelation with the supersensory into account.